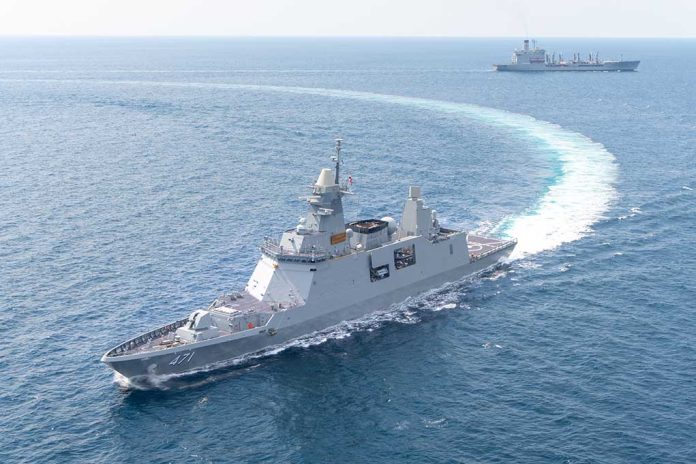 (RepublicanDaily.org) – The threat of other nations developing advanced weapons is one of the most pressing issues with which our national security experts must deal. There are many methods they use to keep a handle on things, but foreign aggressors like Iran and North Korea persist in their efforts to pose threats of this type. The US Navy recently found a large quantity of materials necessary to manufacture ballistic missiles on a fishing vessel traveling in the Middle East.

According to sources, the boat was transporting enough ammonium perchlorate (an explosive substance) to build more than 12 medium-range ballistic missiles. The vessel was traveling from Iran to Yemen, on a route known for the transport of weapons to Houthi rebels. This marks the first time the US Navy’s 5th Fleet has intercepted a shipment of ammonium perchlorate. It also seized two tons of urea fertilizer, which can also be used to create explosives.

The Navy says it seized enough material to fuel more than a dozen ballistic missiles when warships from the 5th Fleet intercepted a fishing vessel heading from Iran to Yemen. https://t.co/8XccHwvIqH

Vice Adm. Brad Cooper, Commander of U.S. Naval Forces Central Command (NAVCENT), U.S. 5th Fleet and Combined Maritime Forces, released a statement about the seizure. He said it was one that stopped “the unlawful transfer of lethal aid” and insisted activity of this kind “does not go unnoticed.”

Do you think our military branches should have better programs in place to make more frequent interceptions like this one, given the threat level emanating from countries like Iran?