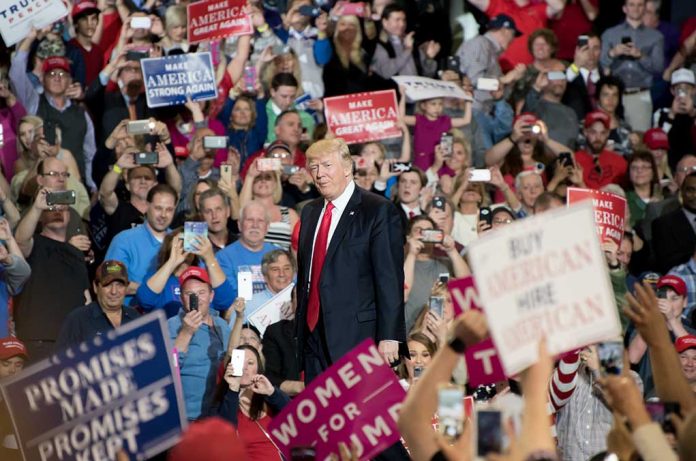 (RepublicanDaily.org) – Since leaving the White House in January, former President Donald Trump has mostly stayed away from large stages. He’s spoken to crowds occasionally, like when he addressed the Conservative Political Action Conference (CPAC) in Florida in February and the North Carolina GOP Conference recently. Now, however, it looks like Trump might be ready to take on rallies again.

On Saturday, June 26, the 45th President held his first rally since leaving office in Wellington, Ohio. He was there to promote the campaign of Max Miller, his former White House aide, who is attempting to unseat Republican Rep. Anthony Gonzalez in next year’s midterm elections. Gonzalez was among the 10 House Republicans to vote in favor of Trump’s impeachment earlier this year: the former president has promised to campaign for opponents of all 10.

"We must never forget this country does not belong to them. It belongs to you the American people. This is your home, this nation is your heritage, and our magnificent American liberty is your God-given right!" #TrumpRally pic.twitter.com/Qr2FNfKEov

During the rally, Trump touched on one of his chief criticisms of the administration: the ongoing crisis on our southern border. He referred to the “millions of people” coming into the country illegally.

The reaction to Trump’s speech was as newsworthy as the statements he made themselves. The crowd, which numbered in the thousands, was ecstatic to see the former president speak. In fact, attendants  started up pro-Trump chants that were popular during his campaigns and time in office, including “lock her up,” “CNN sucks,” and “Trump won.”

Again, Trump’s appearance on the campaign stage is more evidence that he will not stand for the mainstream media’s attempts to silence him. With election season just kicking into gear ahead of next year’s races, one can likely expect more of the same from the former president in the coming months.