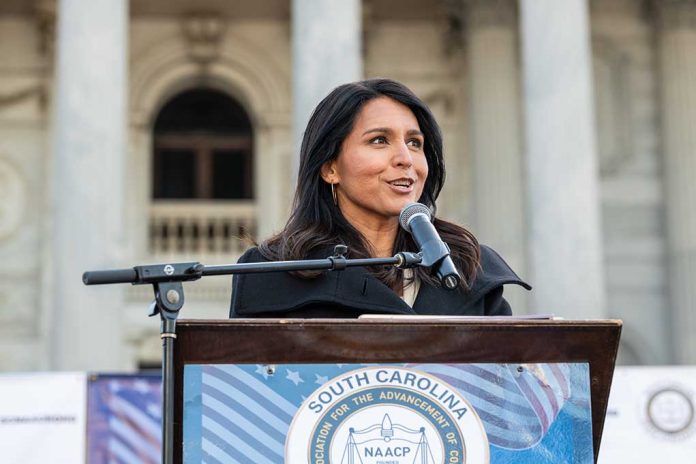 (RepublicanDaily.org) – Vice President Kamala Harris has become a deeply unpopular figure since taking up her current office. Her approval ratings are frequently worse even than those of her boss, President Joe Biden, whose countless gaffes have made him a laughingstock to many Americans. Tulsi Gabbard, the former candidate for the Democratic presidential nomination, has just left the party, and she’s blaming the vice president for a lot of what’s wrong with it.

On her YouTube channel, “The Tulsi Gabbard Show,” the former Congresswoman announced she was leaving the Democrats. She had not been active in politics since leaving the US House of Representatives in 2021. She ran for the Democratic Party’s presidential nomination the previous year.

In the video, she explained she joined the Democrats as a 21-year-old in Hawaii because of the party’s historic affiliations with advocates for human rights, such as President John F. Kennedy and Dr. Martin Luther King Jr. She was particularly impressed by the party’s stand against the Vietnam War and its efforts to improve conditions for plantation workers in her state.

She then went on to explain that today’s Democratic Party was under the influence of “an elitist cabal of warmongers.” She stated Democrats were more concerned with dividing Americans and discriminating against white people than representing those without a voice.

The former Hawaiian Congresswoman’s slight on Kamala Harris came during a radio conversation with Fox News’ Brian Kilmeade. After slamming the Democratic Party’s “woke ideological leadership,” she took aim at Harris in particular, claiming the VP was hypocritical in her engagement with certain issues. She used the example of drug prosecution, claiming that Harris has acknowledged her past use of marijuana but has continued to support the prosecution of people who consume and sell the drug.

After serving in the military for a number of years, she returned to her state to work on the Honolulu City Council from 2011-2012. From there, she was elected to the US House of Representatives in 2012 and went on to spend four terms in the chamber. In 2019, she announced she was running for the presidency as a Democrat.

What do you think of Tulsi Gabbard’s assessment of Kamala Harris and the rest of the Democratic Party? Should more members of the party follow her lead?