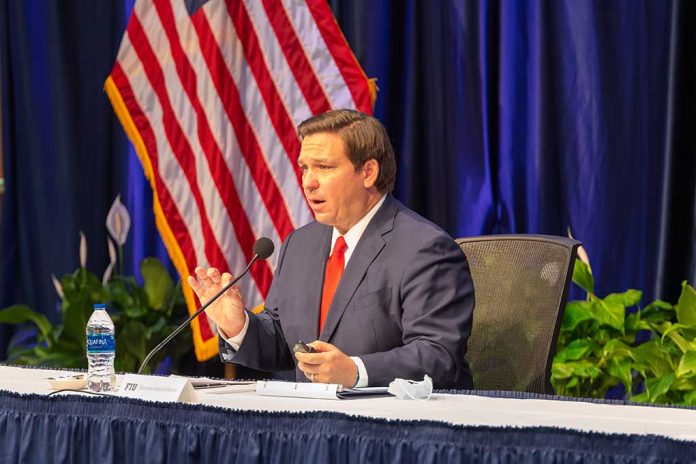 Ron DeSantis Says the People of China Are Right

(RepublicanDaily.org) – Florida’s popular governor has stepped up to support the Chinese people in their protests against the country’s communist regime. China has stuck rigidly to its controversial “zero-COVID” policy, and used authoritarian tactics to force people into isolation during outbreaks. Now, the people have had enough.

.⁦@GovRonDeSantis⁩: “This Zero Covid policy is draconian; it violates people’s liberties & it is completely unscientific & the people of China are right to be able to speak out & protest against what the Chinese Communist Party is doing.” pic.twitter.com/s2pQ7mshWV

At a November 29 press conference, Florida Governor Ron DeSantis (R) turned the discussion around to what’s happening in China right now. Protests have been growing for weeks, after workers at an iPhone factory staged a mass breakout to escape an enforced lockdown. The unrest expanded after an apartment building caught fire in the city of Urumqi — and 10 people died because health officials had locked them inside.

DeSantis said the Communist Party’s “completely unscientific” policy “is draconian, it violates people’s liberties.” He said the Chinese people are right to protest against what their government is doing and condemned the CCP’s “maniacal desire” to control the country’s population, and accused it of using zero-COVID as an excuse to push its control agenda. He added that Chinese citizens are objecting at last, and called for Beijing’s policies to “go to the ash heap of history.”

The Biden Administration has kept a low profile on the Chinese protests so far. But as they grow and the increasingly desperate regime clamps down even harder, the White House must be ready to act.