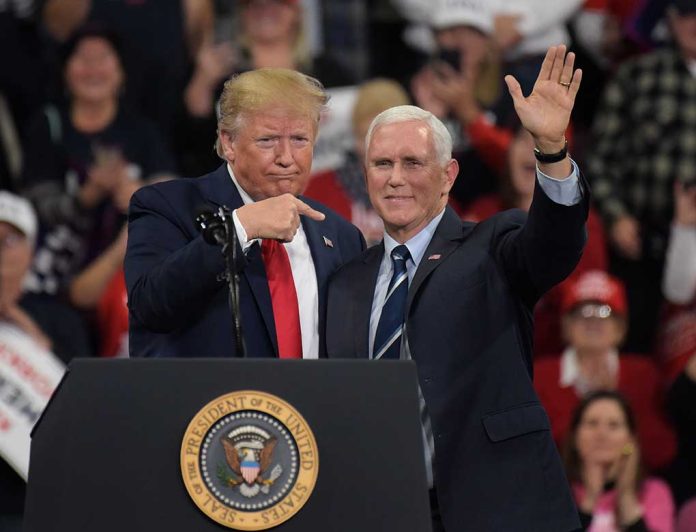 (RepublicanDaily.org) – Former President Donald Trump has found himself at the center of another controversy, and this time it’s not just Liberals and RINOs who are mad at him. On Tuesday, November 22, Trump had dinner with rapper Kanye West (Ye) and podcaster Nick Fuentes — and many leading Republicans are furious.

Former VP Mike Pence says Donald Trump should apologize for dining with a Holocaust-denying white nationalist, but said he doesn’t believe the former president is antisemitic. Watch the full interview on NewsNation tonight at 7p/6C. Find us on TV: https://t.co/TkQWhMl5oB pic.twitter.com/KEFBO8qa0j

Two days before Thanksgiving, Trump invited Ye and Fuentes to a social function at his Mar-a-Lago home in Palm Beach, Florida. As soon as the news leaked, social media exploded with outrage against the former president. Comments were beyond liberal hysteria — this time, the former president could be on shaky ground.

Ye, an influential hip-hop songwriter and rapper who was married to reality star Kim Kardashian, has been facing increasing criticism for anti-Semitic comments. Among other things, he’s implied Jews control the government, the media, and even other rappers. Nick Fuentes is even more controversial; he’s an open antisemite and Holocaust denier, is widely alleged to be a white supremacist, and identifies as part of the “incel” movement.

Senior Republicans were appalled at Trump hosting Ye and Fuentes. Senate Minority Leader Mitch McConnell (R-KY) said it was “very unlikely” Trump could be elected president after associating with the pair. Georgia Governor Brian Kemp (R) slammed Trump and said, “Racism, antisemitism, and denial of the Holocaust… are completely un-American,” according to Mediaite. Senator Mitt Romney (R-UT) said Trump having dinner with Ye and Fuentes was “disgusting,” while Senators Bill Cassidy (R-LA) and Susan Collins (R-ME) also condemned the event.

Mike Pence, Trump’s former vice president, delivered the hardest blow. He said he doesn’t personally think Trump is racist or antisemitic, but said Trump had showed “profoundly poor judgment” and should apologize and denounce his guests.

Is this all a storm in a teacup, or has Trump made a serious mistake?