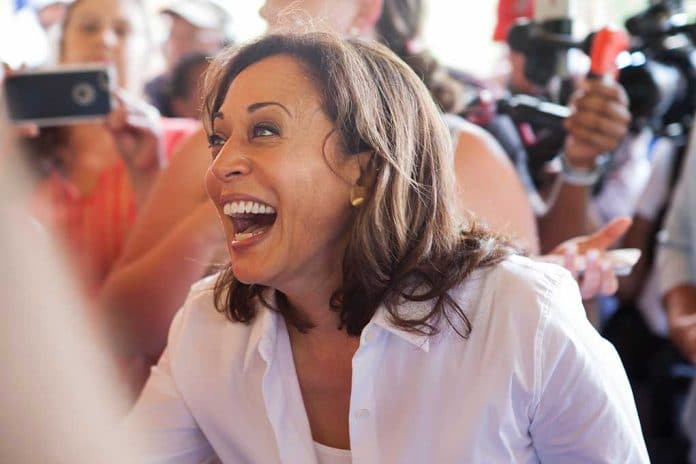 (RepublicanDaily.org) – Polling has become something of a controversial science over the last few years. In the lead-up to the 2016 election, pollsters were sure Democratic candidate Hillary Clinton had the race in the bag. Most analysts gave her at least a 70% chance of beating Donald Trump. Of course, everyone knows how that turned out.

Fast-forward to 2020, and a similar story played out. Polling analysts predicted Joe Biden would achieve a landslide victory over the incumbent Trump, even speculating that he might turn over conservative strongholds like Texas. Biden’s eventual winning margin was much narrower than these predictions suggested.

Therefore, it’s important to take any polling data nowadays with a pinch of salt. However, that’s not to say we can’t learn anything from the results polls produce.

In May, McLaughlin & Associates released a poll showing how a match-up between Trump and Vice President Kamala Harris would go.

Vice President Kamala Harris is not in good shape. Just 47% of respondents to the survey said they viewed her favorably, with 48% viewing her unfavorably. This disparity is more pronounced among people with strong views on Harris. Of those, 38% have a “very unfavorable” view of her, while just 27% have a “very favorable” outlook.

One person who emerged from the poll looking well was former President Donald Trump. The poll asked respondents to pick winners from head-to-head presidential preference match-ups; 49% of people said they would pick Trump in a Trump/Harris race, with only 45% selecting Harris.

The poll also showed that President Joe Biden began with a lower approval rating than his liberal predecessors, and his approval continues to slide.

The main reason for Harris’ lack of popularity is almost certainly her inertia around the border problem. President Biden tasked her with “stemming the migration” back in March, but the VP failed to visit the area until this week. Many had speculated that she wouldn’t have even made the journey then but was forced to do so when it looked like former President Trump would end up getting there before her. Trump announced last week that he was scheduled to visit Texas’ Republican Governor Greg Abbott in El Paso on June 30 to see the border.

Thank you President Trump for getting Vice President Harris to finally go to the southern border.

She would never go without you announcing your trip first.

President Biden is 78-years-old, and many commentators have openly remarked that he might not run again. Should he choose not to run again in 2024, Kamala Harris will be the most likely candidate to go in his stead. The fact her approval ratings are already lower than those of Donald Trump, who’s almost certain to take the GOP nomination if he chooses to run, will no doubt be encouraging for Conservatives.