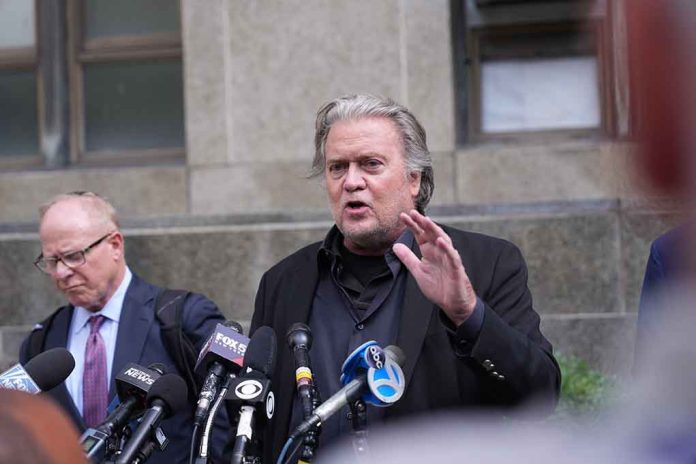 Bannon Sentenced for Contempt of Congress

(RepublicanDaily.org) – Steve Bannon served as chief White House strategist for a short period at the beginning of former President Donald Trump’s time in the Oval Office. After, he remained a close ally of Trump’s. The House Select Committee investigating the events of January 6 issued a subpoena requiring Bannon to share information and submit to a deposition, for which he refused to comply. A federal court has just sentenced him to spend four months in prison following his July conviction for contempt of Congress over his actions.

Reasoning that other individuals needed to be deterred from offending in the same way Bannon did, US District Judge Carl Nichols exceeded the mandatory minimum sentence for contempt of Congress, which is one month. He also fined Bannon $6,500. The judge said he did not impose the maximum sentence of six months because of the broadcaster’s clean criminal record and his previous service in the US Navy.

While Nichols rejected the defense’s argument that Bannon was entitled to dismiss the subpoena on the grounds of executive privilege, he accepted that the law in this area was uncertain and said it was a factor in assessing the defendant’s punishment.

Steve Bannon has been sentenced to four months in federal prison and fined $6,500.

Bannon’s legal team made contact with staffers in Congress in the lead-up to the trial in an attempt to have the charges against him dropped in exchange for testimony. However, the staffers refused his request.

Bannon will remain free while he goes through the appeals process.

Do you think the sentence was fair under the circumstances?