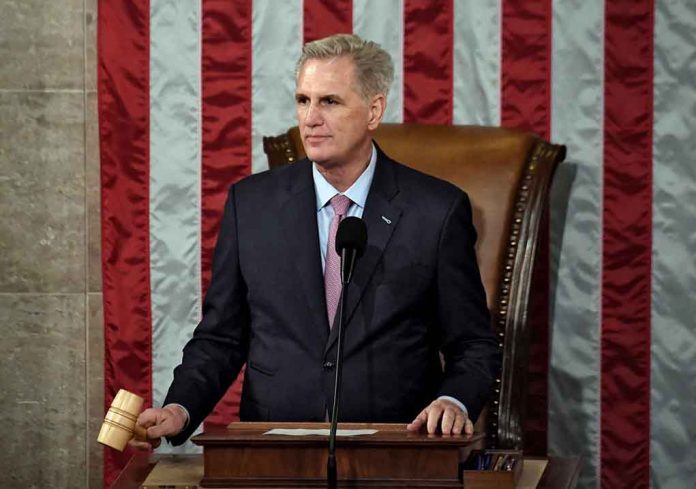 (RepublicanDaily.org) – Newly sworn-in House Speaker Kevin McCarthy announced the end of proxy voting of house members, Fox News reported. The new ruling bans House Representatives from sending votes to sessions remotely, requiring the representative to appear in the House session for their vote to be valid.

The decision reversed the proxy vote permission put in place by former House Speaker Nancy Pelosi as her response to the pandemic lockdown conditions.

Despite the recent hospitalization of Congressman Greg Steube, (R-Fl.) due to a fall, Republicans are pleased with the decision, The Daily Wire reported. Representative Thomas Massie (R.Ky) voiced his approval, noting that the proxy vote was “rarely used” for its initial purpose of social distancing during pandemic lockdowns.

The decision to suspend proxy voting came with protests from left-leaning media. Proxy voting was “a game changer” in the House, wrote Time Magazine. Democrats argued that McCarty and Republicans would use the suspension to their political advantage. The Republicans leverage a strict new voting schedule to “juice” their slim majority, wrote Axios.

Republicans defended the new proxy schedule as important to due process. Majority Whip Tom Emmer (R-Minn.) said that it may “come as a shock” that the Congress would expect its members to “show up for work.” Emmer stated that tardy attendance and a poor voting schedule were the norms under a Democratic House majority, and the Republican majority aims to change this.

Democratic Whip Katherine Clark (D-Mass.) countered Emmer, saying that the Republicans, in their Speaker fight, were “historically dysfunctional.” Axios quoted Clark, saying that Democrats are “united, organized, and ready to stand up for working families.”