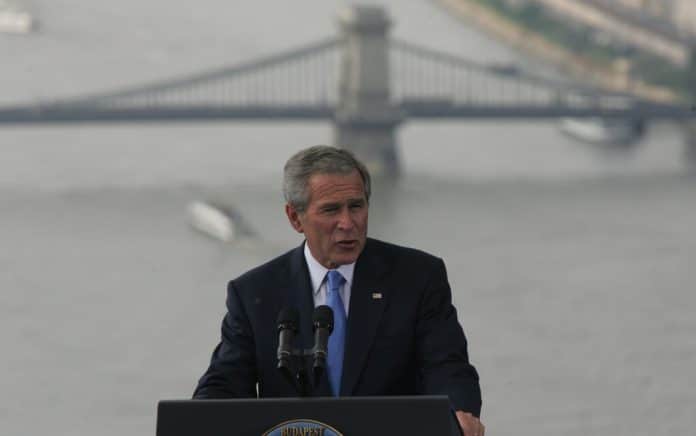 (RepublicanDaily.org) – The war in Afghanistan recently ended, and it was the most protracted conflict in America’s history. However, it wasn’t the only war our troops have had to fight since the turn of the century. The Iraq War began under the Bush administration in 2003 and continued for eight years. Veterans of the struggle are now starting to ask serious questions about its legitimacy.

This week, a furious Iraq veteran confronted former President George W. Bush as the latter gave a speech in Beverly Hills. The veteran accused Bush of causing the deaths of a “million Iraqis” by lying about circumstances in the Middle-Eastern nation before the invasion. As you can see in the video below, Corporal Mike Prysner abruptly stood up during Bush’s speech and delivered an angry tirade against the former president.

An Iraq War veteran just confronted George W. Bush over his lies leading up to the U.S. invasion.@mikeprysner disrupted the former president's speaking event to attempt to read out the names of Iraqi civilians and US soldiers killed. pic.twitter.com/32JypsrGMX

Prysner mentioned “weapons of mass destruction” in his speech. This is a reference to the deadly weapons of war Bush used to justify starting the war in Iraq, saying at the time his officials were certain the Iraqi regime possessed such tools. It has since emerged this was a mistake.

Former President Bush is, no doubt, disgruntled by this encounter. He has enjoyed relatively favorable treatment from the liberal media in recent years, setting himself up as a vocal opponent of former President Donald Trump.