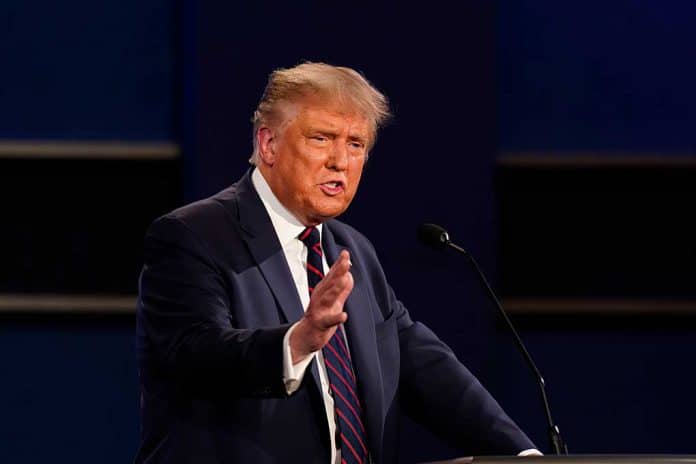 (RepublicanDaily.org) – Since the beginning of the COVID-19 pandemic in the United States in the spring of 2020, we have not been able to enjoy a fully normal existence. Restrictions in one form or another have impacted our lives to some degree. However, with almost two years of the pandemic behind us and viral spread still a major issue, many people are wondering whether it’s time to give up on mandates altogether and resume a normal life.

One such person is former President Donald Trump.

In an interview that will air on EpochTV on Monday, February 7, the former president discussed current President Joe Biden’s pandemic strategy. Unsurprisingly, he was highly critical of everything Biden is doing, particularly with mandates for masks, vaccines, and movement restrictions.

Trump said it was time to get rid of all mandates related to COVID-19, and that they shouldn’t have been there in the first place. He highlighted the fact that case numbers had been higher during the Biden administration than during his own.

The World Health Organization (WHO) appears to share Trump’s view, at least to some extent. This week, the organization told countries they can start reducing COVID-19 restrictions if they have good healthcare, high rates of immunity within their population, and positive epidemiological data.

Did Mandates Even Work in the First Place?

Trump isn’t just saying he wants to see an end to mandates now; he also remarked they should never have been there in the first place. This is an idea that a recent study has indicated might be right on the money.

Three researchers from Johns Hopkins University recently published a study indicating that movement restrictions in the early months of the pandemic might have had very little effect on mortality rates from the virus. The meta-analysis looked at findings from 24 previous studies and concluded that the policies reduced the death rate from COVID-19 by just 0.2%.

The researchers posited that border shutdowns were particularly ineffective, lowering the death rate by around 0.1%. School closures were somewhat better at 4.4%, and closures of nonessential shops (including restaurants and bars) led to a 10.6% drop in virus-related fatalities.

Overall, the researchers said they could not recommend lockdowns and other restrictions as a pandemic management tool going forward. They pointed to the massive economic devastation the measures wrought while they were in force. They also highlighted the unintended consequences of movement restrictions, such as instances of infection caused by sick people remaining in close quarters with family members.

Do you agree that it’s time to leave behind mandates and movement restrictions for good?