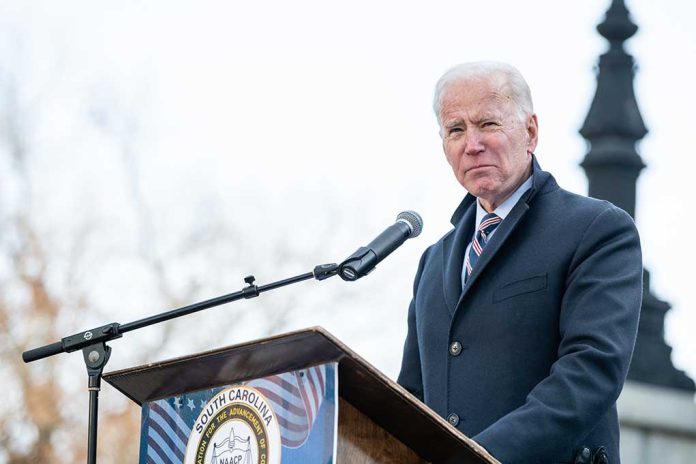 (RepublicanDaily.org) – Now that the midterms are over, President Joe Biden is back on the road trying to promote his economic plans. On Tuesday, November 29, he visited a computer chip factory in Michigan and spoke to workers. Not everyone was happy to see him, though — and some people made their objections clear.

A few protesters and some supporters of Biden out as the President’s motorcade departs from Bay City, Michigan this afternoon pic.twitter.com/8jtqjOLa7M

On November 29, Biden visited a semiconductor plant, owned by South Korean company SK Siltron in Bay City, MI. The company has just announced a $300 million expansion of the facility, and says it plans to quadruple chip production there in the future. Biden is keen to use the plant as evidence his so-called “American Rescue Plan,” a $1.9-trillion spending package, is working. The plan has been widely criticized, with even some of its supporters admitting it’s made inflation worse, but Biden is pinning his hopes of re-election on turning the economy around.

Unfortunately for him, many locals aren’t impressed with his performance. As Biden’s motorcade left the factory, it had to drive past rows of protesters who chanted “Let’s go, Brandon!” at the president’s car. Biden won Michigan in the 2020 election, but for many of the state’s residents, the shine has come off his presidency. With blue states turning against him, even Biden has to see he’s doing something wrong.